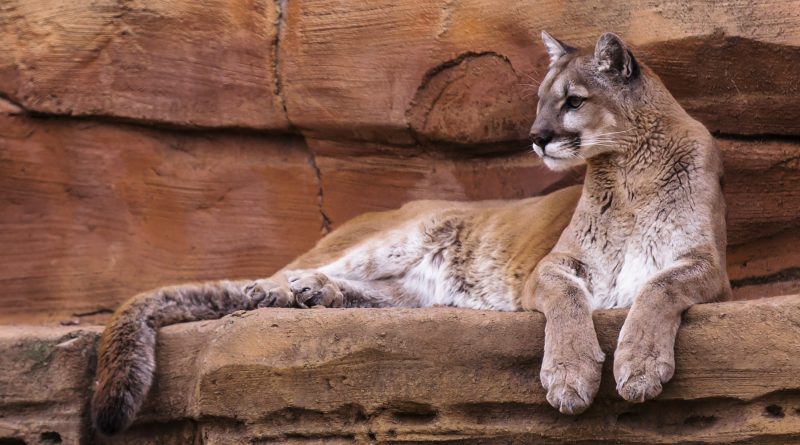 Have you ever seen a big cat at the zoo? Their raw potential is staggering. But I always leave feeling a bit sad. Their muscles are atrophied from lack of use and they pace back and forth in the small safe place we have made for them.

I’ve seen a big cat in the wild. He was such a different creature from his zoo-dwelling brethren. I was riding my horse with the neighbor on an old dirt road. A cougar crossed in front of us and neither of our horses saw him. He was relaxed and unhurried, but still so quick and silent. He gave us a look as though we were not worth the trouble to chase and devour. Then he simply walked across the road and disappeared. My friend and I froze, then turned to look at each other. “Did you see that?” We both nodded, amazed that the horses had no clue. I found his tracks on a sideroad and was shocked at how large they were. I have never seen a zoo cougar or stuffed taxidermy cougar to equal him. I presume it was a male as his musculature was stunning. Cats tend to be slender and most photos of cougar I’ve seen don’t match him. He was a masterpiece of power and grace.

Clearly, zoo cats cannot reach their potential. A cougar can jump eighteen feet vertically from a sitting position. They can leap forty feet horizontally. To develop the skill and power to fell deer (their main prey) they spend nearly two years learning from their mother. Did you know that only one in six mountain lion kittens reach adulthood? Becoming all that God designed them to be is fraught with peril. No one wants peril, struggle, pain, hardship after hardship. Yet that is the life of a cougar in the wild. When I see a mountain lion at the zoo, I know that he is safe and well cared for. Yet a part of me mourns. Why? Because he was made for more.

How often do we beg God for a place in the zoo?

We ask Him for safety. We want sturdy walls, meals that come regularly without us having to worry, trials and pain kept back behind the glass barrier.

Yet so often we still face terrible things. As one who has suffered loss, I know this deeply.

Why would God allow such a thing if He is love?

When pain enters our lives despite our prayers, perhaps God isn’t like a cartoon villain cackling to a snickering dog sidekick as He holds a stick of dynamite behind His back?

Maybe God is more like someone standing at the zoo and staring at the cougar as he paces. Seeing all that powerful potential and knowing with a tightness in His stomach that only hardship can mold this safe cat into the shockingly beautiful creature I saw on that remote dirt road.

It makes me question my prayers. And it makes me afraid. Because then I wonder what I should truly be asking from God. What do you think? Which cat would you choose to become?

John 10:10–“The thief comes only to steal and kill and destroy; I have come that they may have life, and have it to the full.”