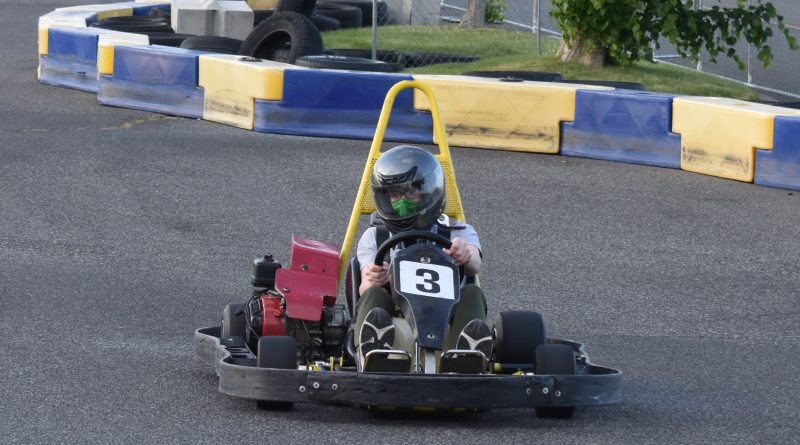 When I asked Brennan what he would like to do for his Mom Day, he knew right away. “Drive Go-Karts, Mom!” Well, normally we have Go-Karts forty-five minutes away in Wenatchee. I called both places and their phones were disconnected. There wouldn’t even be any in Chelan until later. But after much researching I found a track, in Kennewick, a mere three hours away!

That is a lot farther than I’m normally willing to drive for Mom Day. His brothers each wanted to go to a movie together for their Mom Days, which certainly was easier. But he was so excited and any parent of a teen knows that those moments of excitement about spending time with Mom are few and far between. How many more chances would I have to be the hero for my youngest son as the only person willing to drive six hours in a single day for less than an hour of go-carting? I reminded him of the distance but he just grabbed two novels from his brother’s stash and said that he was ready for our adventure!

Now, if you know me, you know that I am fairly adept at becoming lost while driving to new locations. So, I carefully printed off my directions to and from Tri Cities Fast Track Go-Karts and we launched onto our adventure. Brennan immediately started reading the first book he’d borrowed from Theo. We stopped for coffee and scones at Pioneer Coffee in Cle Elem about an hour in and then just kept driving.

I was a little worried that I might have missed the turn once (the sign had a different name for the highway than my directions!) but right as Brennan finished his first novel, we finally made it! Then the tough decision, should we stand in line to ride Go-Karts first or go to the bathroom? We opted for the bathroom … which was a mistake.

I was so proud of Brennan though. He was so resilient, just nodded and said, “Let’s get dinner first.” Well, we hiked around to different restaurants, found that they had two-hour waiting lists, and hiked back to the mall. After grabbing Sweet-n-sour chicken and an Orange Julius, we rolled the windows down and sat in the car munching and reading books together as the time ticked past.

Finally, it was 6:45PM! Our time to drive had arrived. For the first race, Brennan and I both drove Go-Karts. He drove much faster than me. In fact, everyone drove much faster than me. Brennan completely lapped me six times! I still had a lot of fun though and it was great to be part of the adventure. Then Brennan enjoyed three more drives. He got faster and faster with every lap, even passing other cars on corners, yikes! Once he finished, he smelled like fuel. Apparently his car had been leaking gas onto his pants the entire time. Ahhhh! But he didn’t explode or anything, so no problem I guess? At this point I realized that we would be getting home quite late and Scruff had no idea. Since I don’t have a cell (I hate them!) I borrowed a phone and texted Scruff our revised return time of … 11:00PM and off we went.

Brennan wanted coffee as a Mom Day treat, but the two Starbucks we could find were both closed. He demonstrated his resilience again by shaking off the disappointment and just downing the Coke Zero that Scruff had left in the car in case he started falling asleep driving. The entire car smelled strongly of fuel and the night was dark, but we pressed on. I prayed fervently that I would not become lost on the remote stretches of highway that cut through wheat fields and wound along the great Columbia. Brennan finished his second novel as we hit Blewett Pass. Thankfully, I saw how fast he was reading and bought the third book on my Nook before we left internet coverage. I did have to slam on my breaks for a doe that was standing in my lane, blinking at traffic, but we finally made it to our small mountain road. Brennan asked to drive once we hit private property and so triumphantly, at 11:45PM he drove into our driveway and parked. Princess Leia Freyja wagged and wagged, then slobbered and slobbered when she saw us. Brennan rushed inside to tell Scruff how many times he lapped me on the track. Adventure accomplished! It was time to sleep! One Mom Day down, two more to go!

2 thoughts on “To the Go-Karts and Beyond!”