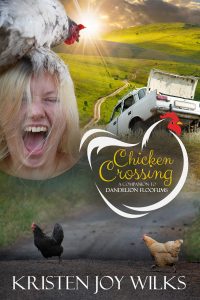 Why did the chicken cross the road?

The machinations of poultry are difficult to decipher. Add an infuriating youth pastor, a terrifying crash at highway speeds, and trap-building kids too bored for their own good and you have something a little more serious than a knock-knock joke.

After the local librarian foolishly agrees to haul a trailer full of chickens over the pass, an unexpected crash sends fifteen beloved hens scattering into the wilderness. Shelby and the exasperating Jack must locate, capture, and return the chickens to his nephew before the talent show at the boy’s new school on Monday. The problem: chickens are incredibly difficult to catch. Especially when dispersed throughout the wild. When they take refuge in a coop occupied by twenty identical hens and guarded by multiple NO TRESPASSING signs and a pair of bored mountain children who have been watching way too much TV, tensions rise and feathers fly. Can Shelby thwart an alarming collection of unlikely traps and find the chickens before they are devoured? Imagination and ingenuity go so very wrong in this epic clash of inventive child verses accidental chicken thief.

Barnes and Noble, Amazon, Kobo Books, get the paperback, or download for free here!

Wondering what Dandelion Floofums was up to during Shelby and Jack’s insane quest? Find out here!

People who have said nice things about Chicken Crossing: Gretchen, Michelle, and Christal.