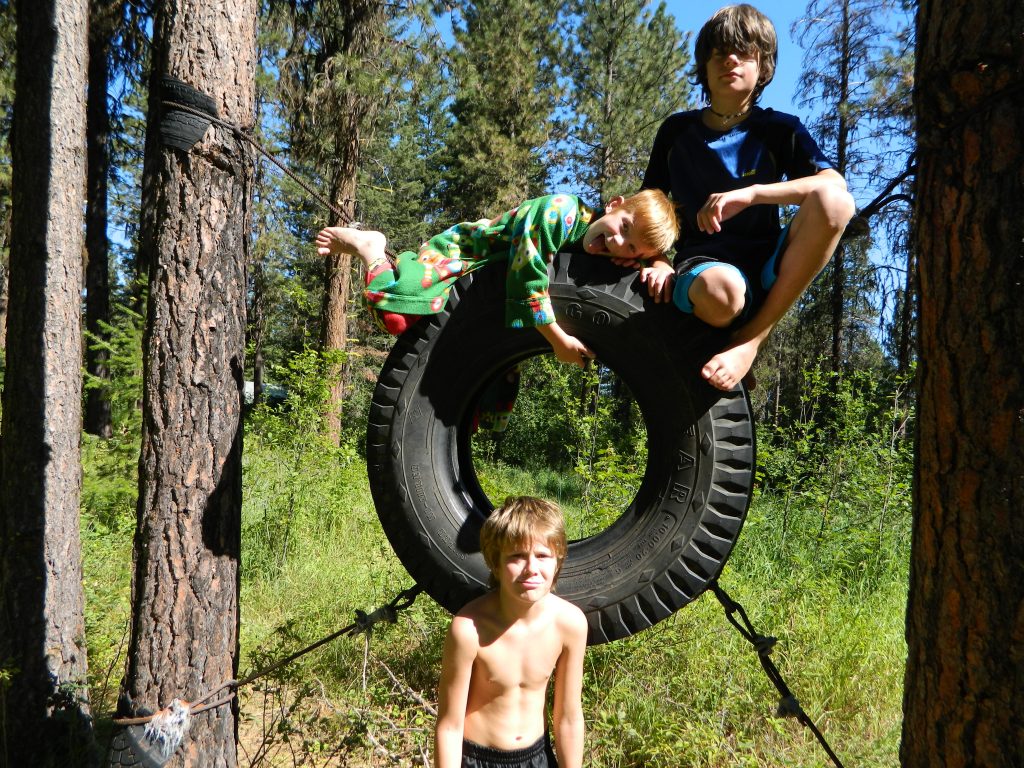 Let’s see, many strange and interesting things happened this week…

The boys “accidentally” flushed the broken handle of a laundry basket down our toilet making it once more necessary to hike over to camp to use the bathroom. One of them grabbed the broken handle out of the garbage to look at and then dropped it. The other boy flushed.

During our drive home from the bus stop, Leia stole a muffin wrapper from one of the boys. They wrestled furiously in the car for possession of the wrapper as I drove down the highway asking what in the world was going on in the backseat, before Leia finally suceeded in snorking it down.

Leia was stretched out on the back seat of the car waiting for the boys’ bus to arrive. Suddenly she decided to roll over. The problem…no room. Plop! She thumps down onto the floor and is wedged tight between the front and back seats with all four paws sticking up in the air. She cannot move or scramble free. I rush around back and make sure that she hasn’t fainted. She has not and is breathing fine, but she is very much stuck. I move the seat forward but she still cannot wiggle free. I attempt to move her, but she weighs 90 pounds and I cannot make her budge. The boys arrive and they want to show Leia to their friend, who laughs at her because she is stuck. They all climb in and I try to keep them from setting backpacks on her or making her feel stressed by bracing their feet on top of her. Finally, when we reach the top of the hill and are almost home. At this point she is able to ease herself sideways until she can flip over and get free. Poor girl. She did get a new squeaky bug toy when she finally got home though.

The winner this week…

I started the car to warm it up for the boys on Monday of last week. The car was in neutral with the e-break on. The car was parked on a slope as a different vehicle was parked in the flat part of our drive. Once all three boys got in, their weight was enough to make our feeble e-break go caput. The car began rolling backwards. The Hunky Hubby looked out the window and saw two boys zooming across the lawn. He ran out and saw the remaining boy trapped behind the door of the car, being pushed slowly but steadily down the drive. He shouted, flung his computer into the air, and sprinted to the car. He was able to stop it from rolling, gather the boys back into the car, and get them to the bus stop in time. But he shattered his cell phone, again, and could barely move the whole day as he did something terrible to his back during his heroic sprint.