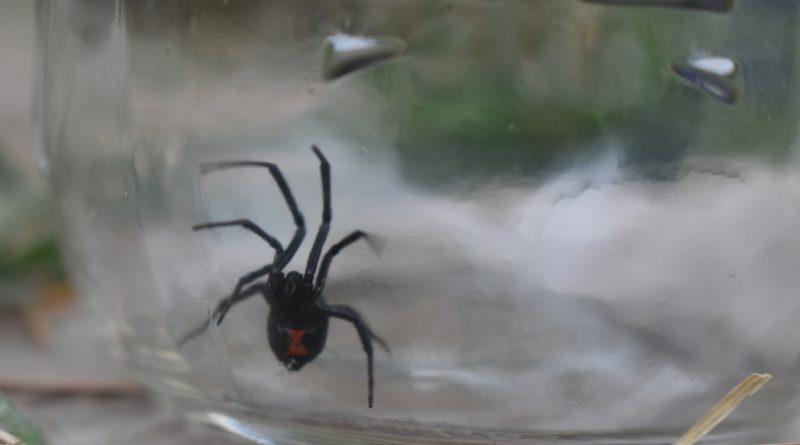 Those of you who know me will realize the incredible bravery that occurred for me to photograph this black widow and then survive editing and posting it here for your viewing … pleasure? Viewing something-or-other, for sure! Well, this terrifying and yet also very interesting critter represents a harrowing moment this week and a blessing of protection from the Lord.

Black widows are not normally found at our house. The area is too cold and dry for them. Widows like moist dark locations and once in a blue moon, like when we pulled the lid off of my great aunt Lily’s old cistern, we see one. But in general, we don’t have them. I’ve seen them down in Leavenworth or Chelan, though, and I am guessing that this little lady hitchhiked home with us from the Bavarian village. Yes, I am incredibly arachnophobia. I’m actually squinting my eyes as I type so that I don’t have to look too closely at the above photo. It has always been a concern of mine that some spider will leap out at me while I am driving, because I have a strong visceral reaction to spiders that defies logic.

So, there I was, driving the boys home from school. Theo ran into the grocery store to buy snacks and then we left. After completing the drive, I put the car in park, looked over, and saw this critter crawling up the dash from either Theo’s grocery sack or his backpack. Knowing that he feels the same as I do, I told him to run. He ran, I pressed against the side of the car with a weapon in hand to smash the spider in case she moved. Thankfully, Theo also grabbed this jar and together we pooled our collective bravery and captured the spider!

We will gladly accept any statues built in our honor … as long as the spider isn’t too scary in bronze or marble or whatever they use. So, after verifying that it was indeed a black widow, Scruff tossed the spider to the chickens, thinking that it would make a good snack and not wanting to let a poisonous spider loose around camp. Mango attacked immediately! She pecked and pecked until she killed the black widow. Then she turned away, refusing to eat it. So interesting. I didn’t think it would hurt her to eat it, but apparently Mango didn’t want to risk a nibble. Mango loves bugs, but while she was quick to kill it, even after Scruff pointed the spider out to her again, she walked away without a single bite. So, we were saved from a spider bite, saved from a car crash, saved from the heebie jeebies, and perhaps our chicken was even saved from indigestion, maybe? What a day!

When the boys were little, we used to have to pick the lock on their bedroom door … a lot. Not that we were expert lock-picks or anything, they had the kind of doorknob where if you just poke something through the little hole in the knob and depress a metal piece, the door will unlock. Well, we did this so many times that this handy metal piece broke off.

Thus, when Brennan went to bed last week and forgot to unlock the door before falling asleep, we had a lot more trouble getting the door open so that Theo and Judah could go to bed. Brennan is a hard sleeper. Pounding on the door did not wake him. Shouting through the door did not make him stir. Pounding and shouting and a whole heap of brotherly complaints did not pull him from dreamland. Therefore, with the little knob thing broken, Scruff had to totally remove the doorknob from the door in order to get it open. As his brothers stomped across the room to their beds, Brennan finally awoke. Blearily he raised his head, mumbled something indistinct, and then fell back to sleep.

Leia tried to swallow an ice cream stick since it retained the faint scent of ice cream long past.

Therefore, I had to leap up, run across the room, and shove my hand down her throat to perhaps save her life. Ah, the life of a Newfy owner.

Leia sneaked into the kitchen behind me and stole the flour scoop while I was baking. She was discovered by one of Brennan’s buddies in the living room snorking down flour. Friend of Brennan–“Is she supposed to be eating flour?” Her whole snout was ghostly white, although she had the gall to pretend that she was not the one to eat the flour. It was definitely Daddy!

Scruffy leaned a ladder against the outward opening door in Bobcat for “just a moment” to put foam insulation along the roofline. Judah had a question about their project and opened the door. The ladder flew out the door. The insulation gun went flying. The ladder hit Judah. Scruffy also goes flying and hurt his ankle. Scruff came home limping. This injury occurred after he’d previously tripped on a cord at work retreat, resulting in a large wound on his shin and the destruction of one of a special mug belonging to ‘Merica one of our board members. Scruff also got hurt spraying stain on the side of the lodge. After the stain sprayer got clogged and then unclogged suddenly, the spray gun splattered log stain all over which bounced off the logs and right into his eye. Maintenance work is dangerous. It’s a good thing we now have Bomber the Maintenance Intern!

Theo dramatically waved an empty dinner plate while talking and accidentally hit me in the arm leaving a bruise. Mothers of boys are injured in such strange ways … .