In my eagerness to use the “insert photo” button on my shiny new Blog, I have carefully perused my photos from last month and found something that is not only of interest to myself, but is also immediately useful to the rest of humanity. And so…dum dum dum dum…today I shall post about Frost! Yes indeed. Well, frost is that hard crunchy water that clings to twigs and branches and rocks and things if one were to leave those items outside overnight. Since most of our trees are not housebroken (cough cough… read as, if Kristen were to bring them indoors they would suffer the same sad fate as every other plant that has been dragged, leaves shaking in terror, into her photosynthesis free home of doom) they tend to acquire a nice coating of frost when the conditions are proper. This photo was taken at the hunky hubby’s prompting when we had a streak of cold weather and the frost never melted during the day but just kept accumulating thicker and thicker on the branches night after night. This type of frost is called “hoar frost” and I believe the only distinction between it and common frost is that hoar frost has long pretty crystals and is much more dramatic to gaze upon.  So here you have it. My first officially blogged photo. 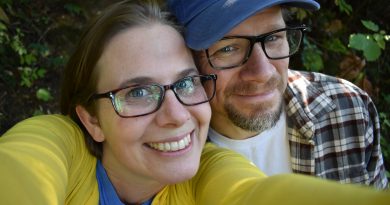