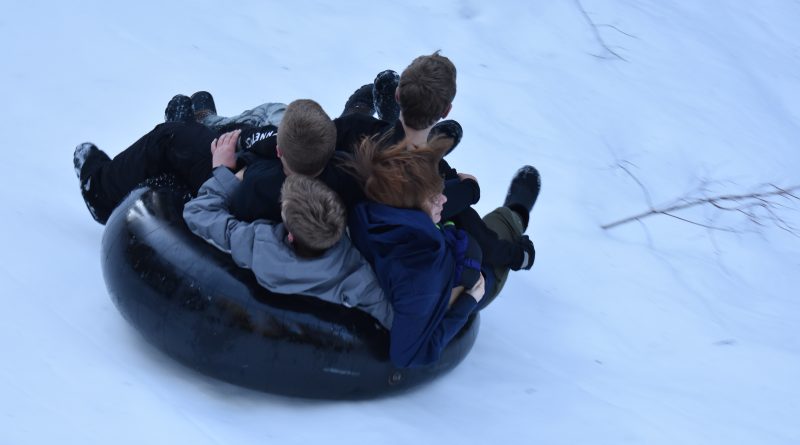 Theo–“Sweden! Those are the guys who ski with machine guns, not Vikings!”

Judah–“You can still ski with a machine gun and be a Viking. I don’t see how those two are mutually exclusive.”

Brennan–Hides behind a door wrapped in his tortilla blanket. He leaps out. “Boo!”

Scruffy–Stumbles into the living room and charges toward Theo. “Ow, my toe!”

Theo–Extends a dustpan toward his father. (He was cleaning the bathroom)

Scruffy–Runs into the dust pan. “Ow!”

Theo–“You ran into it yourself. Only you are to blame.”

Scruffy–“But you were brandishing it.”

An argument ensues about whether Theo was or was not brandishing the dustpan!

*
Bomber– “Spirit Island is to Theo what BBQ sauce is to Brennan.”
*
Chris (Father of 6 girls and 2 boys, on of whom is Kanga)– “God knew I needed all the girls to love on me.”
Boo Boo–“And God gave Scruffy three boys to beat on him.”

*
Theo–“Lettuce tastes like a paper towel, soaked in chemicals, and then made crunchy.”

Kanga–When I told her about the Christian novel that only had two options for female characters. Either they were evil or they were homemakers who offered cocoa and cookies to the main characters. Her response to this amazing storytelling device was: “We’re living in the false dichotomy of either evil … or cookies.”

Boo Boo–“I guess Washington doesn’t have any palm trees…but with palm trees come tarantulas, so I think I’m okay.
*
Bomber speaking to Kanga–“I don’t care if you’re not here to be attacked. I’m here to attack you!”
*
Kanga– “Sneezes!”
Bomber– “Bless you. Unless you’re plotting against me, in which case may your soul never return to your body.”

(Those who know and love Kanga, will understand how often her attack occur)
*
Theo –Instructing the assistant cook as he was leaving to be a camper–“Prism! You need to bother Kanga! It’s part of the job!”
*
Judah: “You’re pretty hard for anyone to find.”
Scruffy–“No, I’m not.”
Bomber–“Have you ever looked for yourself???”
*
Scruffy–“A serious father would not have survived Theo.”
*
Theo–“I could never trust a clone of myself.”
*
Boo Boo–While working on a writing project–“No! I can’t add more adjectives!! I’m saving those words for squirrel insults!”
*
Epona–“Coffee counts as serotonin, not as a meal.”
*
Judah talking to Kanga after driving her Prius in the snow–“I hope I can buy a car soon so I don’t have to drive your car ever again.”

Judah to Kanga–“That’s an interesting clucking sound you made there.”

Judah–“I’ve never seen such an accurate representation of a feeding chicken before.”

We are having dinner with Grandpa Del and Theo has finished.

Theo–“How about a dismissive gesture?”

He flicks his fingertips lazily in a motherly direction and leaves.

Brennan looks up at the ceiling fan in the bathroom

Me–“Your father was fixing it.”

Brennan–“Yeah, I can tell by the groaning noise it makes and how it’s not put together.”

Me–Tells Theo a joke as he is sweeping.

Theo–Groans and pokes at me with a broom. “Back, witch!”

Me–I do my legendary witch cackle! “Remember when I used to say, ‘Obey me or I will cackle like a witch.'”

It embarrassed them to no end. A mother has to have leverage, right?

We watch the movie Storks

Theo–Groans and falls off his chair, sinking to the floor in horror when all the babies appear

Bomber–Is horrified by the movie. She is also appalled that so many in the group enjoyed it greatly. “I’m going to go seek comfort from Theo. THEO!”

As you may have guessed, Theo is not widely considered to be the comforting type.

Theo–“I’m going to use an army of laser blimps to conquer Transylvania so I can make a live action version of Hotel Transylvania!”

Judah–“Those are the only options?”

Bomber–“Where did you put it?”

A discussion arises about how to get up the steep hill (Freese’s Hill) on the way to our house.

Theo–“I didn’t hit that tree, I grazed it, like a cow majestically descending upon it!”

Theo–Is hunched over eating a sandwich in his lair (desk).

Me–“And what are you going to do with that smartness?”

Bomber–“I would have bet all the money I own that would be his answer.”

Theo–“My intelligence is 19, but my wisdom is 3 and I’m OK with that. Well, I’d prefer my intelligence be 20, but yo can’t get everything you want.”

Me–“Kanga and Theo, your hair is very similar in color.”

Theo–“Except mine is more victorious! Well, it depends which way the wind is blowing. Sometimes, it’s Golem-esk … cough, cough, cough.” Yes, he sometimes breaths in a piece of his long hair. The troubles that one with victorious hair faces are many!

Me–“I can’t reach the wine.” (I am attempting to cook Brazilian beans)

The Week in Haiku