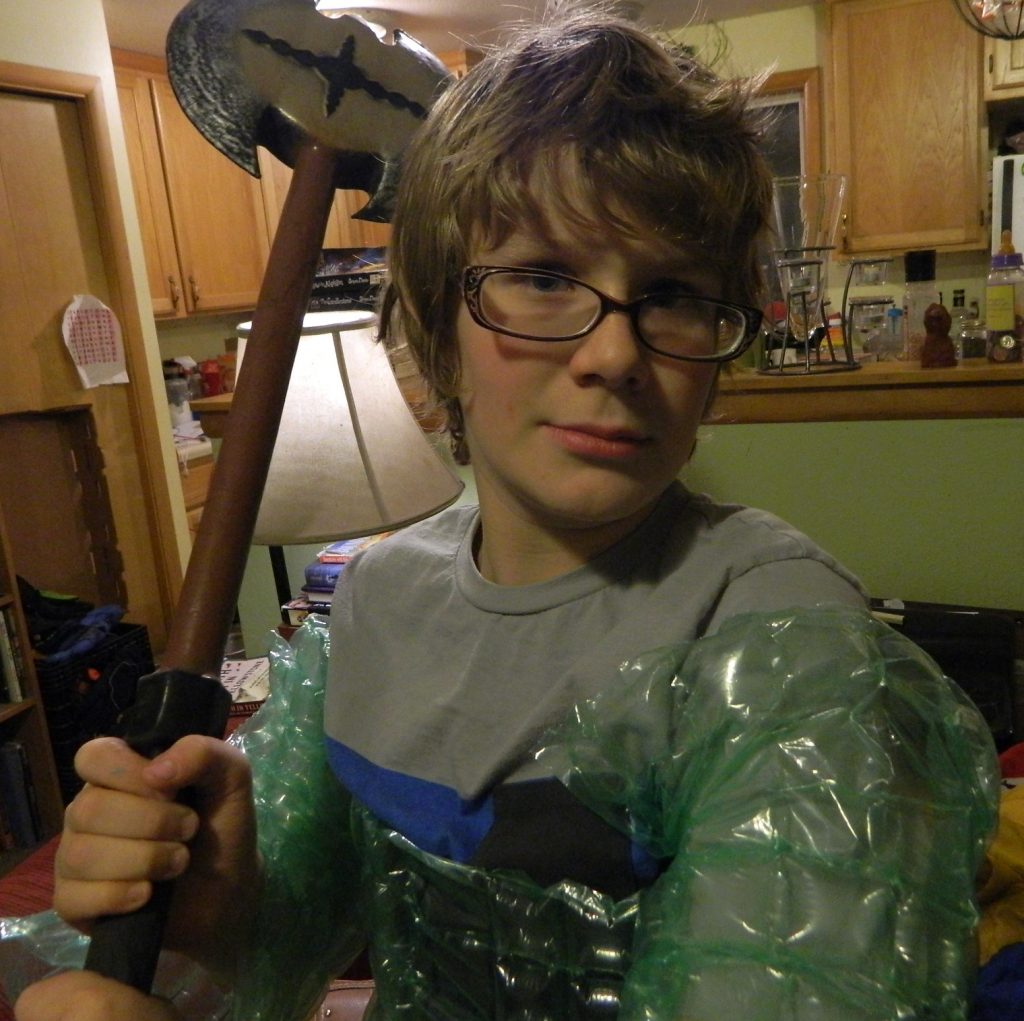 Yes, that is bubble wrap armor!

Sweet Boy #3–“I’m paralyzed from fluffyness.”–He was snuggling the dog instead of getting up for school.

Sweet Boy#2–“Mom, you are not a musical wonder. You’re a musical horror!”

Sweet Boy#1–Has a 104 degree fever and is playing a board game with his Dad and brothers when I discover how hot he has become. I give him ibuprofen to take his temperature down and he keeps playing the game … and wins despite his illness!

One of our kitchen crew came over to play video games with the boys and described something in his Minecraft game as “Voluptuous.” Hmmm … “I do not think it means what you think it means,” as Inigo Montoya would say. He was quite shocked when I gave him the definition.

Sweet Boy#3–Had recently cleaned and organized his dresser–“Can you grab me a pair of socks from my newly gooded dresser?”

We have began watching episodes of Monk with the boys. Some of their quotes reflect the show.

Sweet Boy#2–Describing Randy Disher from Monk–“The person who’s tall and looks kind of like an asparagus.”

Inspired by my lovely sister, I ask the boys what their ideal wife would be like. The older two plead the 5th, but …

Sweet Boy#2–“Mom, you are the ancientest of ancients.”

Sweet Boy#3–“It’s a good thing I have good luck, cause then I’d be turned into a monkey.”

Me–“If you stare into the microwave, your eyeball might turn into an eyeball-microwave-Chernobyl-worm.”

Me–“It’s a very common phrase, all the popular moms say it.”

Sweet Boy#3–You and popular are like matter and anti-matter!”

Hmmm … perhaps they know more about me as a highschooler than I realized.

Sweet Boy#3–Has 5 minutes to spare before we have to leave for the bus–“Is Dad still available to snuggle?”