Sweet Boy#2 was teaching Sweet Boy#3 how to imagine. He laid out five blankets on the floor and instructed his brother to lay down on his back and kick his legs in the air and bounce around all crazy while imagining adventures. Then he told him that he should take one blanket away every year and eventually after five years his brother would be able to imagine without any blankets for padding.

The boys had an argument in the car on the way to school about which of their hens would be more motherly toward Uncle Greg’s new puppy.

I was really sick last weekend and so The Hunky Hubby told me to just rest and not worry about anything. So sweet. But what were the things that I was not supposed to worry about? Laundry and dishes and stuff, but also one of the boys shooting Nerf darts at the chickens and then having to rush into the yard to safe that same chicken when she rushed over and tried to eat the dart, all three boys tossing the chickens through our landing window so that the hens ran around the stairs to “clean things up”, the boys sneaking the hens inside again and making a nest out of dirty laundry for them and putting a bunch of plastic Easter eggs into the nest which King promptly set on, and of course when I made a pot of tea and my youngest spilled the whole pot when he was hopping around the living room inside his sleeping bag. Sometimes it is hard not to worry. 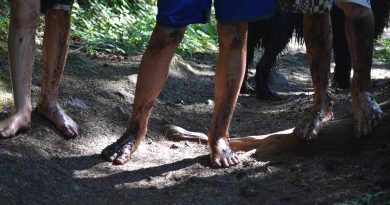 Barefoot Hikers and Other Oddities