Lots of fun times this week…

We had our first snow of the year and so the boys and I celebrated by baking dessert pizzas together. Nutella or vanilla frosting as the base with either cherry pie filling or friend apples and then powdered sugar sprinkled on the top. Yum!

Sweet Boy#1–Purchased a raccoon stuffed animal at the AWANA store and named him Eddie The Rack like the raccoon in the Hank the Cowdog books.

I rented Cinderella from the library. This is a movie we have never purchased for obvious reasons, but the boys do like to see new stuff and so I thought I’d give it a try. The older boys were skeptical, but Sweet Boy#3 was brave and chose it on his pick day. They were slowly drawn into the story with the fun mice and terrible cat to ease them past all the clothing stuff and whole idea of the ball. Then all of the terrible problems began to occur and I saw the tension of their faces. The ball, but no dress. She’ll make the dress, but there’s no time. The mice made the dress, but sisters ripped it to shreds. Oh the pain! Their little eyes were wide with horror. Then the fairy godmother and the ball and midnight. Then the search for the girl and ah the tension, they know it is Cinderella. The duke is at the house but No! She is locked into the tower. The mice battle to free her and the cat catches the mice and Bruno saves the day and Cinderella runs down the stairs. I look over and the boys are all staring at the TV waiting for the glorious finish. I am looking at their faces when the Duke is tripped and the shoe shatters on the floor. Sweet Boy#1 has his hands in his mouth and is scrunched up in a ball of horror on the couch. Sweet Boy#3 has a look of agony on his little face. But Sweet Boy#2 is my romantic. His face was priceless. NOOOOOOOOO! But then she pulls out the other shoe and out come three glowing smiles on three little boy faces. Happy Ending! It was tough, but we got through Cinderella. Have I mentioned that I love those little boys?

Sweet Boy#1 and Sweet Boy#2–Were playing foosball at camp. But instead of just putting the foosball into the little slot they decided that it would be much more fun to toss it straight up into the air so that it would plunk down into the game with a satisfying smash. And it was…until the time that it plunked down right on top of Sweet Boy#3’s head. Ouch!

Sweet Boy#2–Is seen sneaking through the tables at CamasCon with something hidden in his grubby paws. I stop him and investigate. He has gone to the candy dish and palmed 16 chocolate eyeballs!

But the winner this week…

Sweet Boy#1 and Sweet Boy#3–They are happily sword fighting on the roof of the camp woodshed (I know, I know. I told them they could be up there as long as they didn’t run or jump around. Apparently young boys do not consider sword fighting as either running or jumping. Though mothers have different opinions about that), and all is going well until Sweet Boy#1 gets stabbed in the arm. He is outraged. For Sweet Boy#3 was using a rusty and slightly broken length of metal instead of a safe and marvelous stick like he was. I confiscated both the stick and the rusty piece of metal and then bandaged up his wound. Gotta love those little boys. 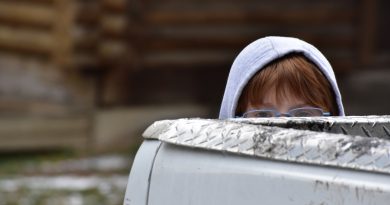