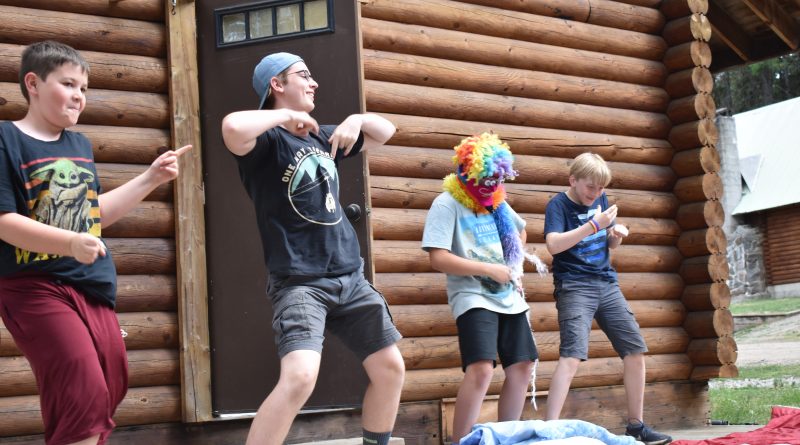 How did a weird tangent during cabin discussion about the omnipresence of God lead to a scary story about the boogie man, morph into lots of dancing, briefly shine as a fairly accurate reflection of the speaker’s theme for the week, and then result in the camp’s winning skit?

The amazing powers of God as He works His wonders in Middle School Camp through rowdiness, confusion, and more beauty than we can possibly imagine.

On Wednesday morning, Scruffy and Princess Leia Freyja led the campers on a hike to view the mountains across the meadow.

Yes, this gorgeous view is well worth the hike. But something even more amazing happened on the way there. Truly, God uses the strangest things for His glory!

During the hike, one camper kept peering at each flower we passed and asking if it was a rare flower. Lupine, Scarlet Paintbrush, fading Sunflowers. None of these were rare, although they are all lovely.

She had a family member back home who loved gardening and this young lady really wanted to show them a photo of a rare flower. My heart sank. We do have rare flowers here at Camas Meadows, but the Wenatchee Larkspur weren’t blooming yet. We also have several species of fragile flowers, the Mountain Lady Slipper and Trillium which are unlikely to grow back if picked. But these bloom earlier in the year and were long gone. I knew that there was one more rare flower in our meadows, but I didn’t know how to identify it and had no idea when it bloomed. Nonetheless, I prayed about this camper’s desire and then we continued on our hike. Even as I admitted that seeing a rare flower was unlikely, the determined camper paused to investigate every blossom. We rounded a corner in the trail and saw a group of DNR workers across the meadow. They had scattered small flags everywhere. What on earth were they doing?

They were marking the exact locations of some rare flowers! The Wenatchee Mountains Checker-mallow. I had not even thought of trying to find one of these blooms as this was that pesky flower I was unable to identify. A simple hope and prayer. A girl wanting to see a special flower to show her loved one. God saw this and answered in such a beautiful way. Not only were they blooming, but there was a plant biologist with a master’s degree in rare plants on hand when my feeble plant knowledge failed. When we are weak, He is strong! So here it is, the Wenatchee Mountains Checker-mallow in all its quiet beauty.

When I looked up this flower later, I was shocked to see that it only blooms in five locations around the Wenatchee area. To be fair, I was told this during my much grumpier teen years and had forgotten, failing to absorb the importance. Camas Meadows has the largest population of this rare plant in the world. Not only is the flower rare, it is also endangered. One website claimed that the Wenatchee Mountains checker-mallow was “the rarest known plant in Washington State.” Whether that is true or not, I would say that God answered this camper’s hope and prayer with a vengeance! We even got to have a lengthy chat with the plant biologist as she personally pointed out various blooms for me to photograph.

OK, guys. If you want to learn more about The Boogie Man Boogie, you’ll have to head on over to The Campfire Blog!