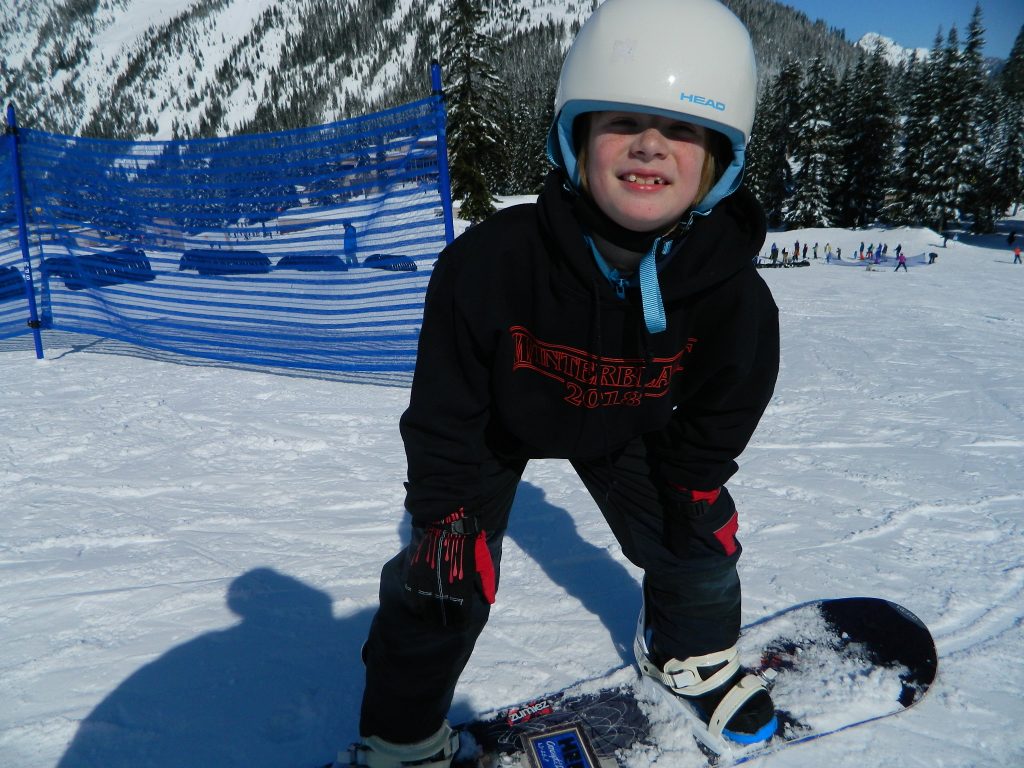 Sweet Boy#3 and I took off for our annual Momma Day and decided to do something that he has been longing to try all year … snowboarding! A ten dollar board from the thrift store that might or might not fit him, a mother with exactly one day of snowboarding experience to teach you, and no lesson, what could possibly go wrong? 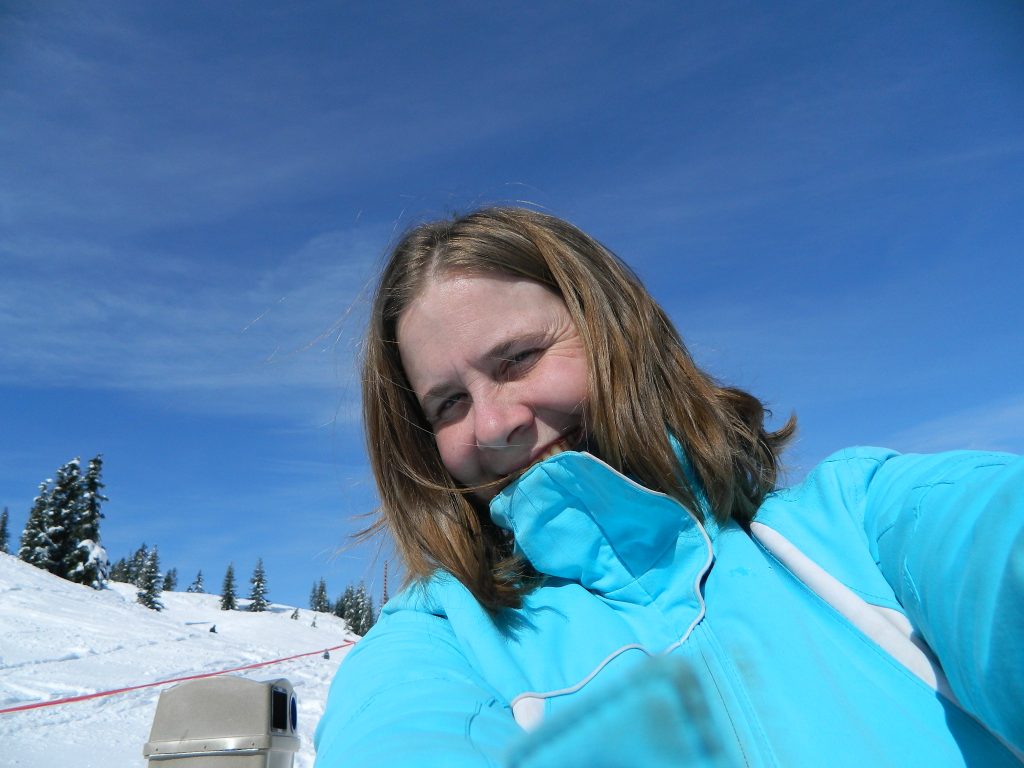 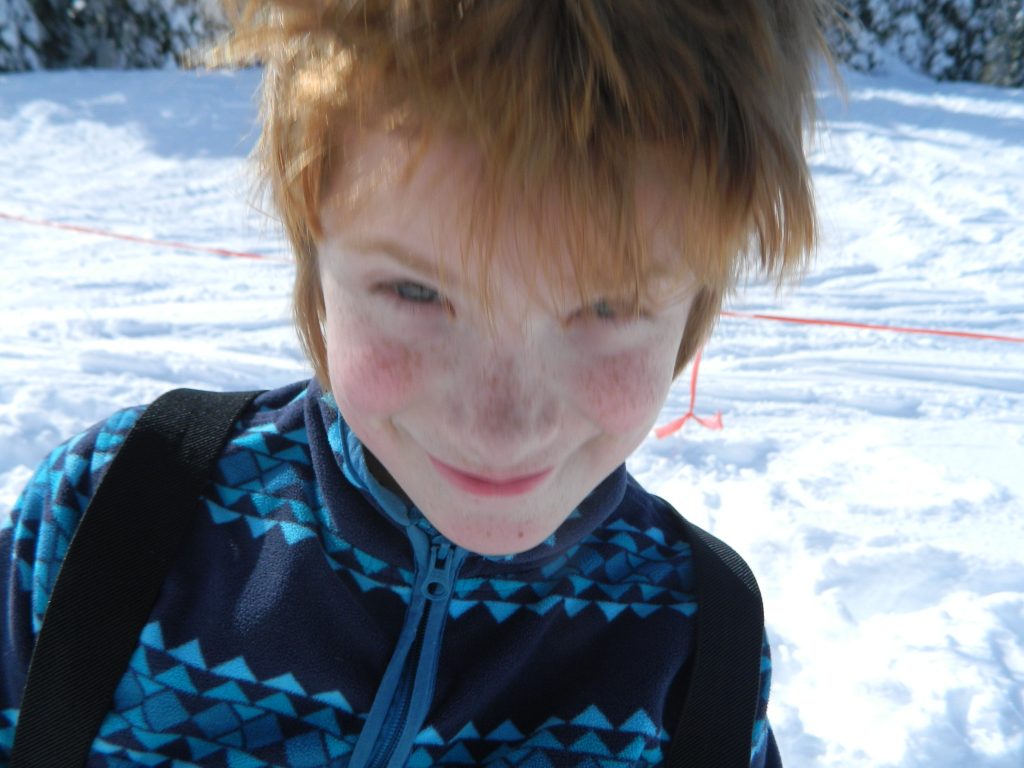 And so, my feisty redhead skipped the tiny bunny hill and we rode the magic carpet up the larger bunny hill. Success! True, he didn’t really turn, but he didn’t need to, he just zipped down the hill and declared that he was ready to try a chair lift. I forced him to go down two more times and off we went to the Daisy chair. 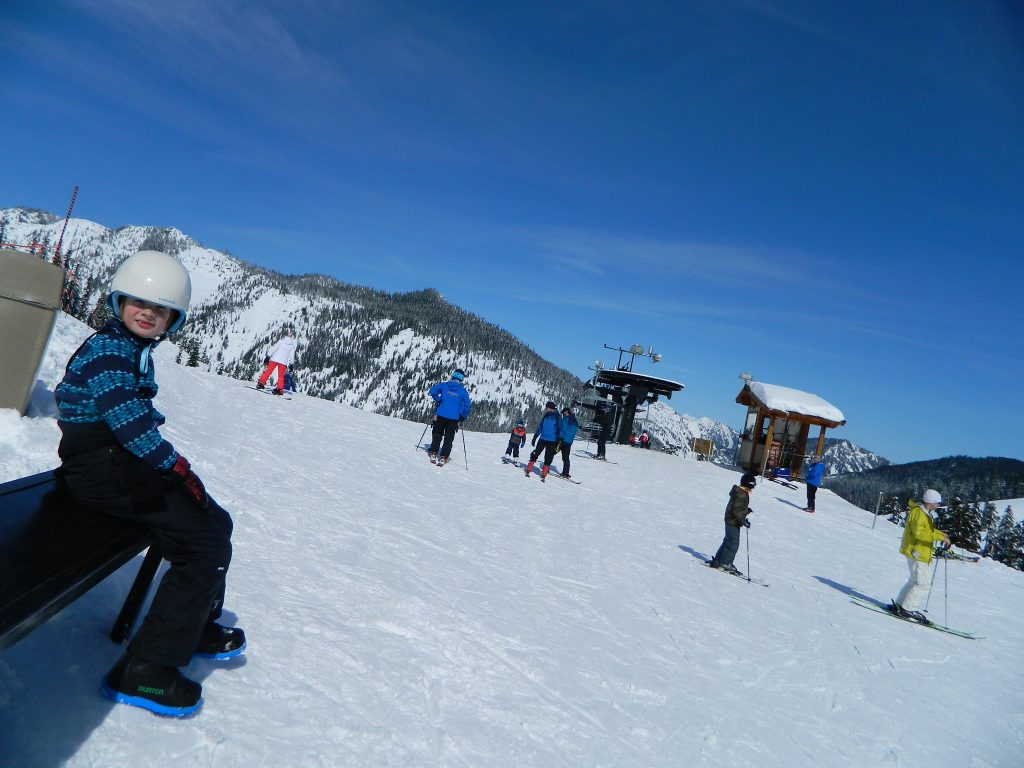 Here he is at the top of the chair where we are both indeed alive! It was touch and go there for a moment. Two seconds after we successfully placed our rumps upon the seat and were swooped aloft, Sweet Boy#3 declared that he was “done” and wished to get off the lift. “No, hang on tight!” I extolled. We used various mental tactics to remain sane, including but not limited to, simply imagining that we were seated comfortably on a couch that was zipping along a mere inch above the ground. He made it off the lift just fine and we snapped this photo before we proceeded down the run. I will not elaborate upon what occurred next. It is sufficient to say that it took 45 to 60 minutes and did not fulfill any of our snowboarding dreams. There are reasons people pay $400 dollars for a snowboard and bindings that fit and then fork over the dough for lessons. Valid reasons. 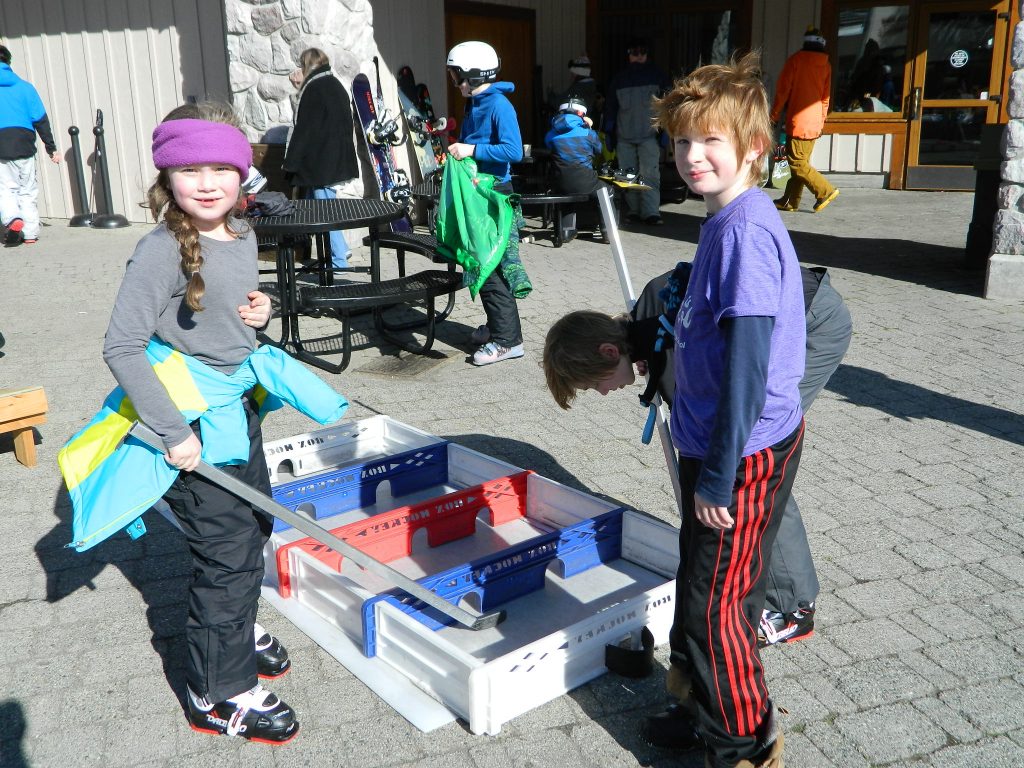 But the great news, we got to eat! Plus there was a very fun game of box hockey going on with other random children who were waiting around for their parents. 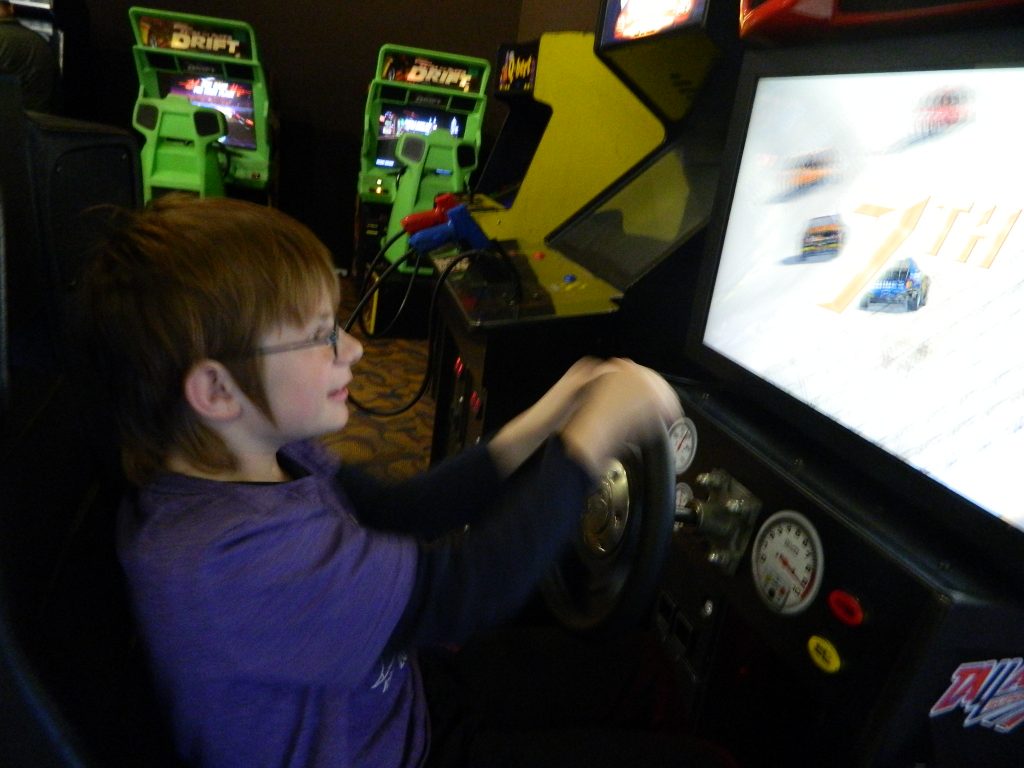 Then we hastened unto Wenatchee (a one hour drive) for the 4:00 showing of Black Panther … and it was the VIP showing, where they would not admit Sweet Boy#3 due to the small factor that he was not 21. But we were undeterred! A mere two hours and fifteen minutes later was another showing of Black Panther for those who do not wish to down adult beverages during the show and we decided to await this movie experience in the arcade. Thankfully, one of the boys had paid me back for a book using all quarters and so our wait was far more enjoyable than expected. When the quarters ran out we read books. 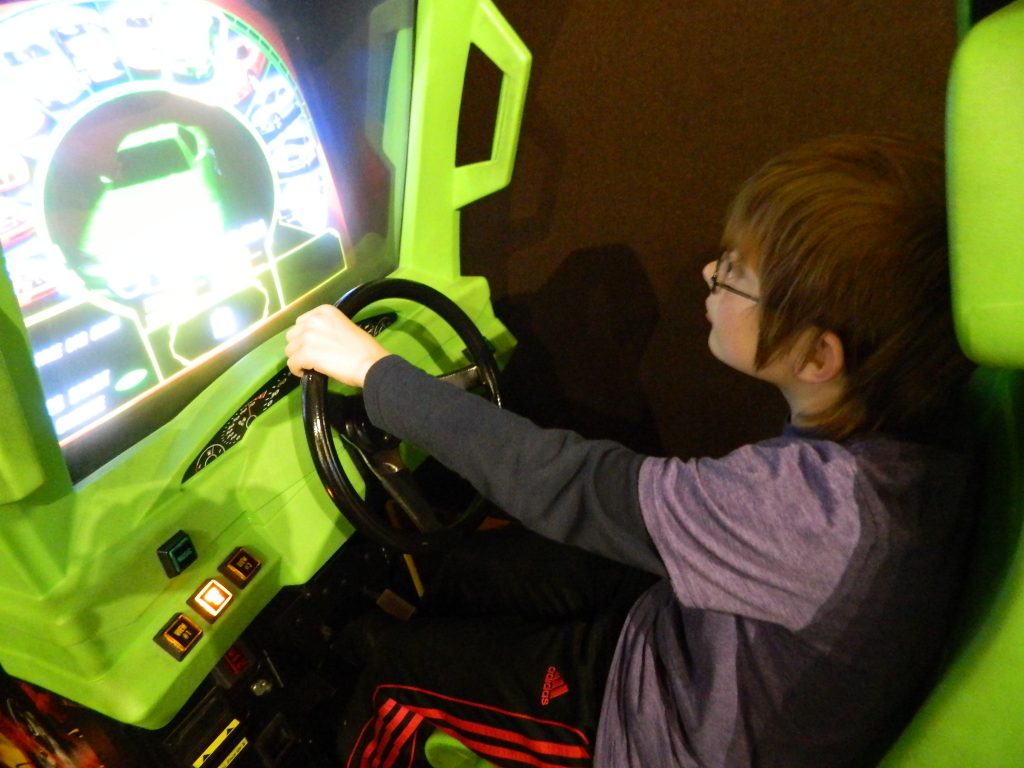 The books did not run out because I always travel with about two books per kid and my Nook. The Hunky Hubby’s cell phone inexplicably turned off (I think I pressed the wrong button, killing it) and I could not call to explain that we were both alive. But eventually, I mashed enough buttons to make it work and we were able to call home as we waited. 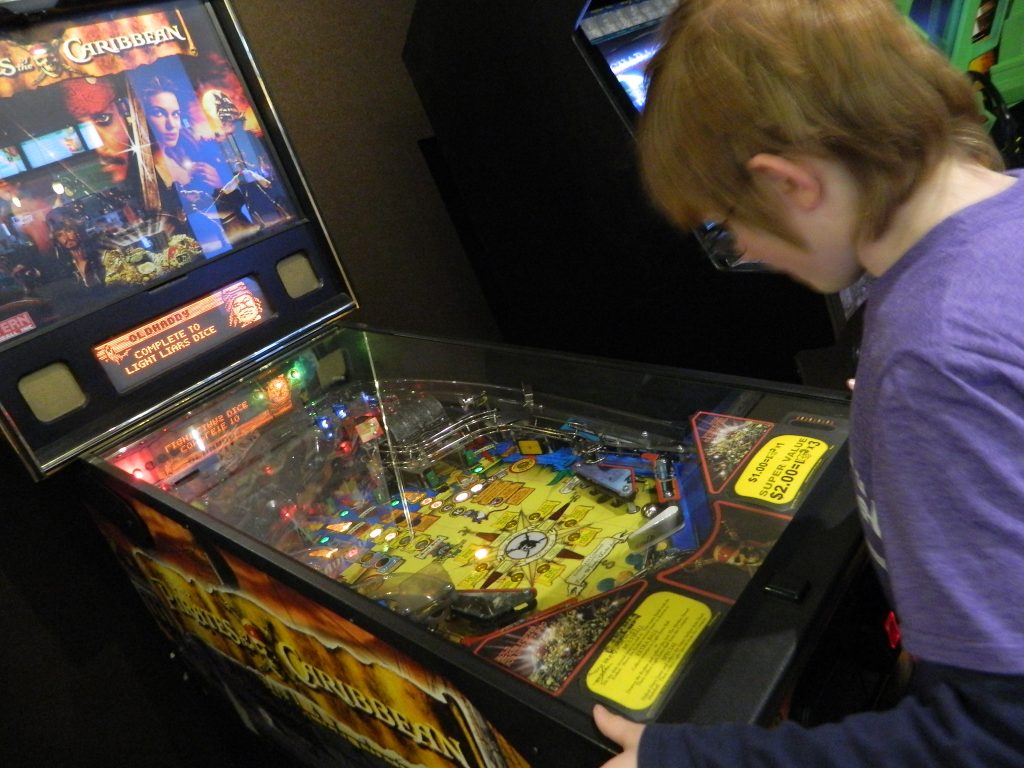 Yes, there was also pinball! Finally, finally, finally the hour had come and Sweet Boy#3 and I got seats in the very front to enjoy Black Panther. When asked what he thought of the movie, he said: “Epic!”

Rendezvous at the River 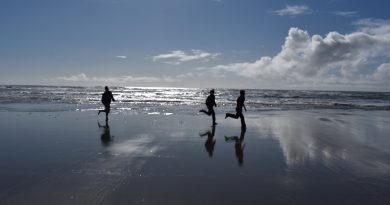