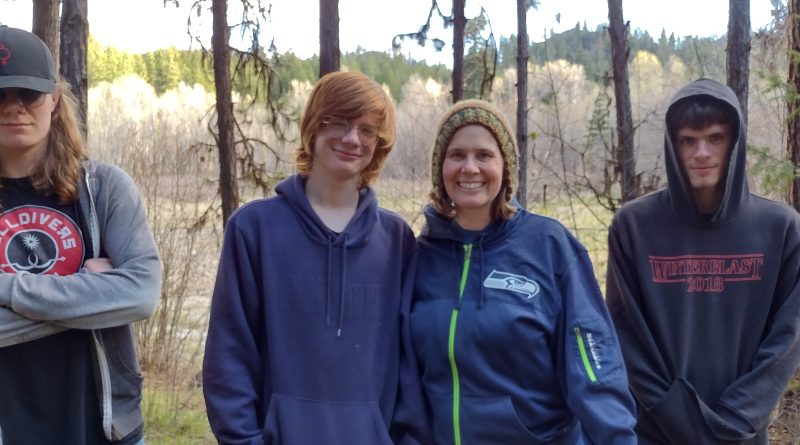 Bomber–“I would be more worried if he actually had the science degree.”

Scruffy–“Let’s see if he makes it to his junior year. Let’s see if he finishes his English final. Don’t count your chickens and pop your weasels yet.”

Theo–Spoken in his terrifying mad scientist voice–“I’m going to pop all the weasels!!!”

I sit at my computer, working on my writing while Theo plays “Mary had a little lamb” on his hurdy gurdy.

Kanga–“Your kids are being mean to me.”

Some discussion on what makes a good date movie occurs … .

Theo–“Hey, if the girl won’t go to a vampire movie, she’s not worth marrying.”

As a mother, I have some concerns.

Theo–“The bathroom is mine! I only loan it out.”

Brennan–“I don’t know why, but my last three socks have had the same hole in the toe when I get home from school.” They were all new socks.

Brennan–“My toe is just too glorious for the sock!”

Theo–Sits in his lair (desk in the living room) eating Gourmet Zesty Garlic Seasoning Salt out of the shaker.

My oldest (an adult now) informs me that he will be hanging out with friends.

Judah–“We’re pulling an all-nighter at Winco.

Me–Blinks back at him in confusion before replying–“Well, take pictures for me.”

Judah–“Think about it this way. Most friend groups would go out to drink and do drugs. My friends just want to hang out at Winco.

He is not totally wrong there, ha!

Bomber expresses the desire to put marshmallow peeps in the microwave.

This plan is not met with universal approval.

Epona–There are some things in this world that are pure and should never be corrupted. Kirby is one and peeps are the other.”

Bomber–It concerns me that peeps have made it onto the list of pure things in this world.

Epona–There really is a microwave of evil.” –MegaMind reference.

Bomber–“My $1.50 has been given to the corporation of Safeway. The peeps are all mine!”

Epona–“You don’t want to eat them, just microwave them. Don’t you think that’s a bit sadistic?”

Bomber–Takes her duly purchased peeps towards the microwave of evil.

Epona–“Yes, blow up the microwave. May it never commit crimes again!”

Me–“How did you go from being so cute to so evil?”

Theo–in a super creepy voice–“Remember, everything your child does is your fault.”