Sweet Boy #3 awoke in the middle of the night screaming due to a nightmare, as he often does, but he was actually was able to articulate  his experience for the first time. “Someone do dat!” he screamed over and over. I rocked him and he finally went back to sleep, but the hunky hubby thinks that he was having a bad dream about being blamed for someone else’s mess. A distinct possibility considering his brothers. But he is not the only one having dreams. His brothers also dream about him. Sweet Boy #2 has dreamed that Sweet boy #3 was biting him, a possibility as well. And Sweet Boy #1 just recently dreamed that Sweet Boy #3 had turned into a venomous snake. Can you feel the brotherly love anyone? But they play so nicely…and loudly when they’re awake, you may say. And that is true, but that does not mitigate the fact there there is often biting involved. Ahhh life, and brothers.

Sweet Boy#1 didn’t quite make it and we were cleaning the bathroom floor together for maybe three minutes when sweet boy #3 saw the opportunity and struck. He pulled a full box of life cereal off the counter and dumped the whole thing in the middle of our living room carpet. Fight the establishment!

I foolishly attempted to exercise again. I set them all up painting, knowing full well that we would have to sop up spilled paint water and some misguided creativity but hoping to squeak out 15 minutes to run up and down our stairs. I got less than five in before some super mother sensor began to sound and I rushed into the kitchen to find them painting…with a full container of the Hunky Hubby’s beloved hazelnut coffee creamer. And they say exercise is good for you. Ha!

But the winner this week. I don’t even know how it happened, but the Hunky Hubby and I were looking down at Sweet Boy #3’s head and saw a whole patch of singed hair! Singed hair…fire! We quizzed the older boys extensively. Had they been playing with fire? Did anyone mess with the gas stove? Did they find matches? Sweet boy #1 who is pathologically honest said. “No Momma, the last time we played with fire was at camp with Daddy.” I quizzed the Hunky Hubby…they had started a fire together for the campers or something, in an approved fire location. Sooo…why the singed hair. I can hear the click click click of our gas stoves burner being lit from anywhere in the house so I know that wasn’t it and in order to get singed on Grammy’s wood stove he would have to press his face up against the actual surface, which all of us would have noticed, especially after Grammy’s heart attack when she saw him. So what happened. I called my lovely sister. Had she seen any flames in little boy hands? No flames, but he was cuddled up to the gas heater. Ahhhh, the gas heater. There is a little nook between the wall and the heater that gets snuggly warm and he squeaked back in there the other day and did burn his finger. That was the best we were able to come up with, I’m pretty sure the mystery is solved, both of us saw him there. But still it makes you wonder. Burnt hair is never high on your list of items to find on your young children, or your old ones for that matter. 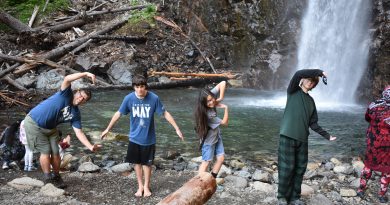