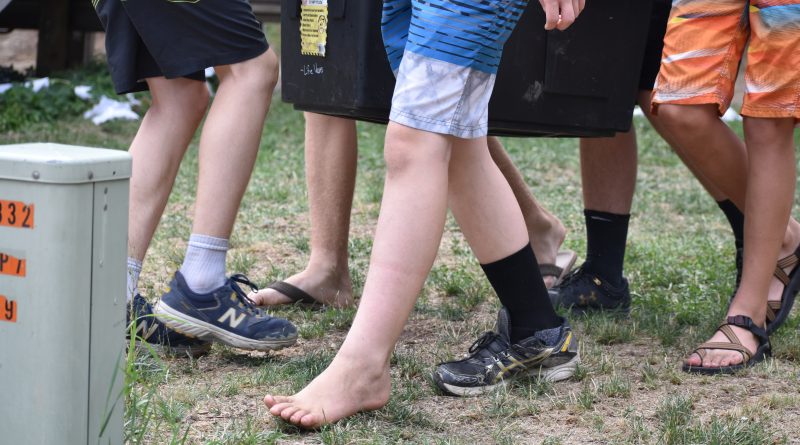 Theo works for hours to clean the porch in order to get his computer back early following consequences. The porch looks great and I tell him so. My unruly blond teen looks at me, bends and picks up a wood chip, then tosses it onto the perfect porch. Ah teen boy, thy name is defiance!

Theo locks 8 square batteries together end to end to form a box. He then leaves them on the counter. I discover them and am horrified to find that they are growing alarmingly hot! I recall all of the exploding battery stories that I’ve heard and ask him why on earth he would proceed with this casual insanity. His answer to my reasonable query: “Because …” Lots of prayer all you moms of teens. We proceed with lots of prayer!

I take my three teenage sons and two of their friends to the river to swim and then out to get milkshakes. As I wait for the milkshakes and chat with the restaurant worker, I mention that there are five teen boys in my car. Sounds of wrestling fill the vehicle and the guy in the drive-up window exhorts me not to look back. He is correct. When I do look back, I discover that not only are they wrestling (with seatbelts on???) but that Theo has found and opened a can of soda. He is about to sip, but sees that I am about to witness his unsanctioned sugary beverage. So he yanks the soda away from his lips, sloshing it all over his friend. The friend shouts, more wrestling occurs. Chaos briefly reigns. They then happily consume their milkshakes. At one point on the drive home, I hear exaggerated choking noises and screams from the back. I am forced to utter several terrifying sentences, including but not limited to: “Theo, stop choking Brennan!” and “Brennan, don’t lick your brother’s feet!” Yes, as Theo is (while still in his seatbelt???) kicking Brennan in the head, Brennan retaliates by both licking and biting his brothers highly stinky toes. I calm them down enough to proceed safely down the road and finally release them into the forest surrounding our house where they happily run amok.

While Theo (age 15) and his friends are charging through the forest, Judah (age 17) and Brennan (age 13) head to the shower after their swim in the river. The problem, our family of five shares one bathroom. “I call first shower!” Brenan shouts as he scrambles to grab clean clothes.

“No, I already called first shower in the car!” Judah snatches up his clothes and shoves his brother out of the way before making a break for the bathroom.

Brennan wraps Judah in a bear hug, yanking him to the floor. Judah, clutches his change of clothes tight and smashes his brother into the carpet. Brennan grabs Judah’s leg but drops his clean pants in the scramble. While Brennan tries to simultaneously prevent his older brother from getting through the doorway and find his pants, Judah climbs over top of him, sprints down the hall, darts into the bathroom, and slams the door with Brennan hot on his heels.

Brennan pauses in the hallway, clean clothes scattered behind him and hair sticking straight up. “Hi, Mom.” He gives me a hug and then patiently waits for the bathroom.

The crazy thing, after retelling this adventure to Scruffy, his response is this. “It’s nice to see them having fun together instead of just sitting and staring at their computer screens.” What is even crazier, I find myself agreeing with him, ha!

The Harrowing/Heartwarming Parent Momet of the Week