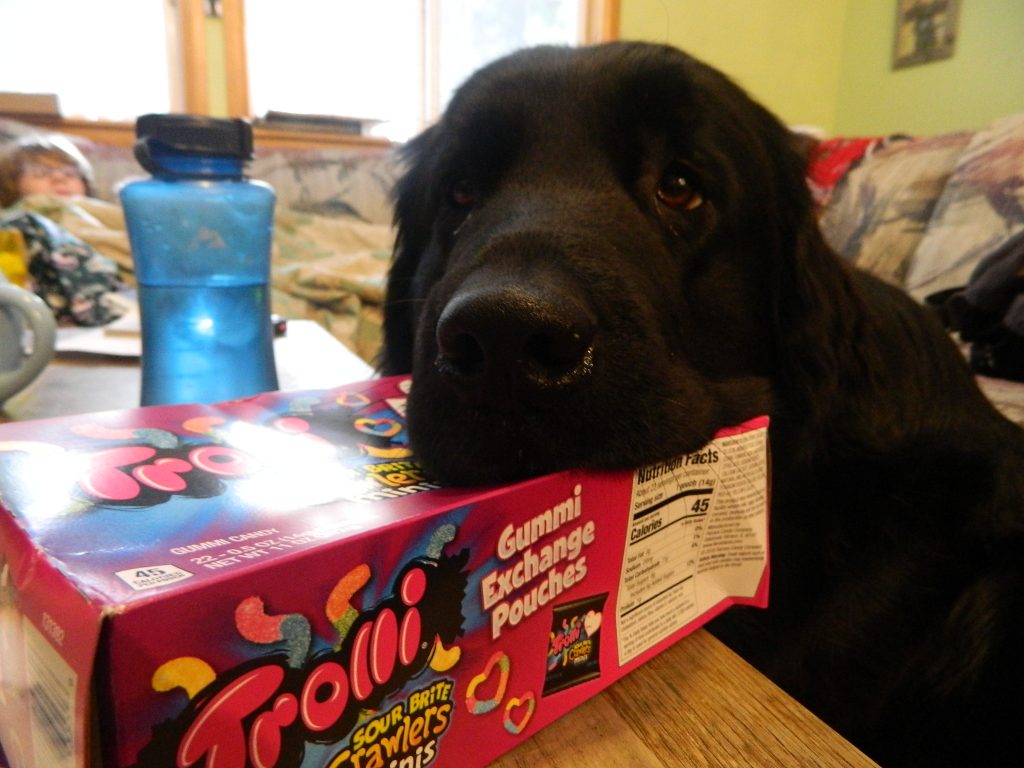 Sweet Boy#2–Has a gusher of a bloody nose. Decides to play a trick on his mother. Wipes and splatters an enormous amount of blood upon the wall in the hallway and then leaves so that I will discover the scene of an apparent homicide and wonder who was killed. He then walks down to the cousins’ house with his face all covered in blood to give them a bit of a scare.

One of our camp dishwashers comes looking for his shoe at 7:30 am. “Does Leia have a special spot where she takes shoes?” he inquired. I pointed over by the couch where The Hunky Hubby often sits working on his computer. Usually she takes shoes to him. Sure enough, there was the shoe!

Sweet Boy#2 was looking for his tennis shoe in the crazy morning bustle as we were trying to get out the door to school. Finally when Leia got up to follow us to the car he found it. She’d been sitting on it all the time.

Princess Leia Freyja is not the bravest dog we have ever owned. But her fearfulness sank to a new low when we drove up to the cousins’ house and she spotted a terrifying bag of chicken food slumped in the car port. She barked and growled fiercely. I left her in the back seat and got out of the car. Slowly, I crept up on the bag as though approaching a dangerous animal. Then I lunged at the bag and gave it a few stiff punches. She exploded! Leia launched out of the back seat and landed in Sweet Boy#1’s lap in the front. She smooshed her face against the windshield barking and snarling in her desire to save me. Then I paused and gave the bag a pat. She flinched back, leaping and landing in the driver’s seat. When I returned to reclaim my spot behind the wheel she was very relieved to see me alive!

I caught Sweet Boy#2 red handed, literally. For some inexplicable reason he got into my red food coloring and colored his face and hands red. He is twelve and a half!

Sweet Boy#3–Loses the entire sole of his tennis show while out floating boats in the creek with the cousins.

Sweet Boy#2–Makes a plate full of jelly bellies and adds orange soda making a charming sludge that he slurps up happily. However, Princess Leia Freyja also has an inexplicable fondness for sugary sludge and Sweet Boy#2 has to dispose of his creation after she gets her snout into it at long last, after days of thwarted sugar-stealing attempts.

Sweet Boy#2–Asks me to wake him up 30 minutes early for school so that he can read! Love that boy!!!

My grandmother died this month at the age of 94. The boys have lived next door to her their whole lives and I grabbed three of her cute little perfume bottles when they were clearing out her things so that they could remember her when they looked at them. Wrong decision!!! First, Sweet Boy#3 tested out his perfume in the bathroom, leaving the whole area wrapped in a foggy haze of hideous flower stench. In response to the overwhelming aroma, Sweet Boy#2 sprayed his cologne onto his pillow, leaving it unusable until washed. Then there was a fight in which both of them were madly spraying the other as though engaged in chemical warfare in a nation with very loose rules of engagement for such attacks. At some point before I confiscated both perfumes, Sweet Boy#2 decided to play a “trick” upon both me and the Hunky Hubby by spraying my seat in the car liberally with cologne and also spraying the dog, leaving both the seat and the dog surrounded by a noxious cloud. But my sentimental idea was not a total failure. Sweet Boy#1 accepted his small perfume bottle, thanked me, and placed it upon his bookshelf, unopened. The other boys are welcome to remember Grammy fondly through the use of charming perfume bottles, as soon as they leave the house.

The Harrowing/Heartwarming Parent Momet of the Week