I was attempting to exercise this week. I know I know a big shock. And have injured myself. I was running up and down our little stairs punching at the air and feeling very Billy Blank ish when it happened. OUCH! My ankle twisted and I sank in near agony down to the carpeted (and dog hairy) steps and rested my sad brow against the wall. Then little voices. “Mama mama what are you doing? Why are you laying there? Can we run instead of you? And so I summoned the strength and hobbled up to our house after a mere 2 min of Aerobic movement, to sit with the icepack and several boys bounding around me with helpful solutions. One made a resting place for me with beanbags while another leaped about and finally landed on my foot, just to check that I wasn’t faking I’m sure. The hunky hubby informed me that this was only the beginning, once your ankles start to go it’s all over, I might as well order my false teeth today and be done with it. But I had the last laugh.

Not only did he injure himself later that night (ankle, knee, and back) but he did it doing the ultimate in geeky activities. He swore when he went to that board game convention that he would never sink so low as to play a L.A.R.P. or Live Action Roll Playing game. Because those geeks actually get into costumes and run around with foam boppers and fight each other. Much much geekier then sitting and playing a board game. Well some of the “Big Boys” as my little ones call them, decided to play a re-ball game where they were pretending to fight zombies. Yes indeed, some of them were shooting and some of them were literally wandering around growling and stumbling about demanding “live brains”, I informed him that he had just participated in a L.A.R.P. While horrified, he was not too proud to cancel on them. There were zombies to shoot after all and someone has to save the world. So I am vindicated. While I did injure myself with my misguided attempt to develop thigh muscle, He hurt three body items and has escalated to absolute irreparable geekdom! 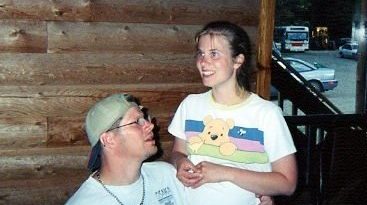