There were some sweet and funny moments this week.

Like when I confiscated all of the camp coat hangers from the boys, but Sweet Boy #3 found one. I bent down and asked him if he would obey. He thought a minute, said “No”, and with a touch of sad resolution just handed it back to me knowing that it would inevitably be taken.

Or when they turned the carrots on their plates into “poisonous wheat plants that were the same temperature as lightning which is 5x hotter than the sun” and went hunting with them.

Or when Sweet Boy #2 put on 14 pairs of undies and ran around the house in a furie of delight because his hind quarters wiggled impressively when he walked.

Or when they made “A pickle Storm” at the table.

Or when Sweet Boy #1 was overcome with a fit of rage and tried to crush one of Sweet Boy #2’s toys with a small jar of pimento stuffed olives.

But there was this one day. And I wasn’t sure I would be able to blog about it, because it simply is not funny. Not to me. It was hilarious to the boys. But The Hunky Hubby felt certain that given a good 20 or 25 years this day would slowly gain hilarity within my mind until there would come a time that I regretted not writing it down in its entirety for myself and posterity. And so I shall begin. But I warn you…It’s not funny!

We started out doing school and all went well until our online teacher called for a forgotten parent teacher conference. We were not done yet. But unable to continue instruction I let Sweet Boy #1 roam free as I talked on the phone. I could tell that something was happening. In the middle of the call I realized that Sweet Boy #2 and Sweet Boy #3 had gotten into a package of instant pudding, but like a fool I told them “no” and finished my call. Only then did I come, in all of my mothering glory, to lay down the law and bring the toxic cleaning crew to bear upon their swath of destruction. And indeed it was a swath. I discovered that they hadn’t just opened one packet of pudding, oh no, they had opened and dumped 7 packages of instant pudding and jell-o onto the carpet and bean bags and then added 1/2 a bottle of hand soap with the help of Sweet Boy #1. I couldn’t vacuum it up, it was soapy and sticky and horrid in every way. I finished school and made them lunch and bathed them all as they were gritty with pudding and then spent an hour scrubbing the two foot portion of carpet that had soaked up the majority of the pudding. It never came out. We will see what a carpet cleaner can accomplish.

Then Sweet Boy #3 tipped over the vacuum while I was scrubbing, yes I did attempt to vacuum it all up. And the grubby vacuum water pooled onto my newly cleaned carpet.

We never got to go outside that day. And as I was madly cleaning one side of our house they would be madly destroying another.

They dumped out all of our straws. Twice I think.

As I was attempting to empty the bean bags to wash their covers, they unzipped our large bean bag and scattered stuffing all over the living room.

As I was cleaning up the stuffing and answering the ringing phone they dumped an entire garbage can into Sweet Boy #3’s crib.

As I was cleaning up the crib they dumped another garbage can all over the living room.

Now I am not a pushover. I disciplined them…a lot. It was Awana day, and they didn’t get to go. They were heartbroken and so was I, until the next disaster struck. I took away their evening movie. Friends came up to play (we live way up in the mountains and friends never come up) and even when The Hunky Hubby finally came home all excited to take the boys over to camp to play with their friends. They didn’t get to go. Not until the horrible hurricane was cleaned up and the said friends began to die of starvation and we took them some food. I took away a tub of toys and decided they would go to the thrift store. I thought up many creative consequences and still they rampaged.

I have thought a lot about how this happened, now that the storm has ceased. And I see where I went wrong. It was that very first mess. After that it was all over. With only one adult in the house you can’t clean up a room full of pudding or stuffing or garbage or brown sugar and carefully enforce angelic obedience simultaneously. I let that first infraction slide. Oh I told them no. But I finished my call to Sweet Boy #1’s teacher and didn’t follow through until a few minutes later. I am a person who likes to finish a task before going on t0 the next one. If I hear gleeful giggling from upstairs while I am hanging up their snow clothes on the landing, I finish hanging those last two coats before investigating. If I am typing an e-mail I like to finish, if I am loading the washing machine I like to add the soap. I have come to realize that completing a task is a luxury I can ill afford. I must rush to them at that first malicious giggle. Zoom into the kitchen at the first clink of the sugar canister easing across the counter. Fly to my brood when I hear water turning on anywhere in the house or laughter near the toilet. Difficult, against my nature, but I must leave sentences unfinished, dishes half loaded, and let the washer swirl and churn without soap on occasion.

But that night, after they had all been tucked into bed, and were sleeping flopped across their beds in destruction induced exhaustion, I looked at their sweet faces and realized that I did alright. I didn’t do it perfectly, made some mistakes, and no our carpet will never be the same, nor our bean bags. But the crib cleaned up well and so did the boys. I didn’t have the calmest face or voice, but I wasn’t screaming at the top of my lungs either. And most importantly, while I did express my horror in a stronger tone than I would have chosen during saner calmer moments, I never said anything that is going to put them into therapy in twenty years. They knew I was furious, but in the end as I tucked them into bed, they laid down with that settled confidence of children who know that they are loved.

We survived. And someday…maybe someday, this just might end up being just a tiny bit funny. Even to me. 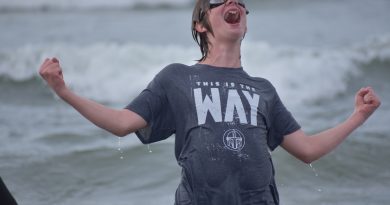 The Gift of Driving

4 thoughts on “The Harrowing/Heartwarming Parent Moment of the Week”