Once again, we had several interesting incidents this week.

Sweet boy #1 told me that sweet boy #3 is “The biting-est baby in the world!”

As a parent you hear the strangest words come out of your own mouth. Well, this week I actually heard myself say: “We don’t ever want ants on the toothbrushes.” Yes indeed, as you have probably already guessed the big boys were zooming around the house collecting dead ants by squishing them into their toothbrushes. Some kind of unnatural wintertime ant invasion has caused more havoc to our already rambunctious living space.

The Hunky Hubby caught sweet boy #2 “pretending” to stick his head into the potty.

Sweet boy #3 was feeling a little droopy with a cold and so he deigned to snuggle with his mother in the rocking chair. I rocked him for awhile and slowly was lulled to sleep, the baby never succumbed to slumber but it worked really well on me, as I began to snooze I began to dream. Race car tracks scattered all over the floor! I thought I’d just picked those up 2 minutes ago! AAAaaaaahhhhhhhh! Then I snapped awake. The floor was clear, a little crumby with leftover snack, but clear of tracks. I had just cleaned them up. It had all been a dream.

But the prize this week goes to sweet boys #1 and #2 in the “Messes on Purpose” category.

The boys were doing a craft. A beautiful butterfly craft. With glue…and scissors…while I was changing sweet boy #3’s diaper…and washing my hands.

Later that day we were eating lunch. Peanut butter and jelly. Sweet boy #3 had PBJ and a fruit cup. His self-feeding skills are still suspect but he is quite insistent and does occasionally get nutrients into his mouth, and so I humor him. Well, foolishly, I took 3 steps over to check my sister-in-laws blog. When I returned, this is what my baby’s tray looked like.

It was an exciting week indeed. 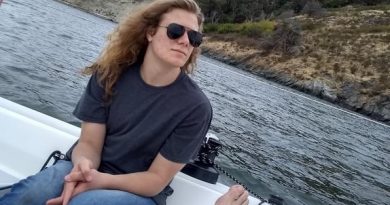