Come and join me over at The Campfire Blog.

Scruffy sent me a fascinating article from The Huff Post this week. It concerned Kim John Payne’s book, Simplicity Parenting and the effect of an endless excess of activities and toys on the mental health of children. Payne noticed a similarity between the children in refugee camps that he worked with as a young man and affluent modern day youngsters he encountered in his private practice.

“Payne conducted a study in which he simplified the lives of children with attention deficit disorder. Within four short months 68 per cent went from being clinically dysfunctional to clinically functional. The children also displayed a 37 per cent increase in academic and cognitive aptitude, an effect not seen with commonly prescribed drugs like Ritalin.”

So there you have it, research to back up what my mom told my brother and I so many times growing up. “Just go outside.” Whenever we started to argue or gripe or complain of boredom, she would hurry us out the door for some good old-fashioned unstructured play. Read More . . . 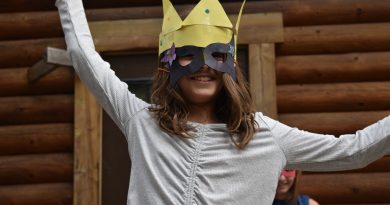 The Masks We Wear