I know these aren’t really Boy Quotes. But I have something for Friday already and so I’m telling stories instead. 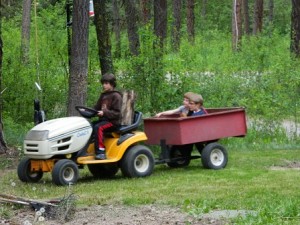 When it was time to bring the pet chickens home to our house, The Hunky Hubby allowed our oldest to drive his brothers down to the cousins in the lawn tractor, retrieve the chickens, and drive them back. There are things that your father suggests that your mother would never have thought of…or granted permission for. On the way down, one of his brothers sat in the seat with him to help make it heavy enough so that the tractor would engage. But what to do on the way back when his brothers were needed to hold chickens in the trailer? Sweet Boy#1 demonstrated his problem solving skills by placing a round of firewood in the seat with him. The chickens were successfully retrieved, but I’m not sure that they enjoyed the ride as much as the boys. 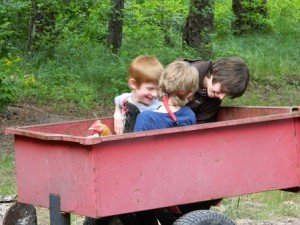 Sweet Boy#3 finally lost his 1st tooth! It has been lose for a long time, at least a month. He’s been wiggling it and flossing around it and tugging and pulling it. He was pushing on it with (a cup I think) and boom, it just popped out. The bad part…it came out so suddenly that he swallowed it. His very first tooth, gone. Many tears followed, along with my reassurance that if he ate some crackers his digestive system would be fine and that yes the tooth fairy would still put a dollar under his pillow. He colored a tooth on a piece of paper and stuck it under his pillow. The Hunky Hubby wanted to color a picture of a dollar and leave that under his pillow to find. Thankfully, I got there first and left real currency. Sweet Boy#3 was thrilled when he found it. Crisis averted!

We had a rash of brotherly discord the other day. I made sandwiches for the boys at lunchtime over the weekend, but not every lunch actually made it into the mouth of the one I intended it for. The boys had gotten their chickens out of the pen and were letting them run around the lawn and play (aka look for bugs). Sweet Boy#1 stole part of Sweet Boy#3’s peanut butter and Nutella sandwich and gave it to the chickens. They enthusiastically devoured it. This went so well that when Sweet Boy#2 came out of the house with his lovingly crafted ham sandwich, Sweet Boy#1 pounced upon him and made him drop half of his sandwich. The chickens descended like velociraptors and snorked down his sandwich immediately. Much weeping ensued. I gave Sweet Boy#1 the job and making a new sandwich for his brother and made sure that he added each ingredient that Sweet Boy#2 loves, including course ground pepper on top of his tomatoes. As he was eating his new sandwich, Sweet Boy#2 got a bunch of mustard on his hand. In the spirit of retribution, he wiped the mustard on Sweet Boy#1’s chicken. Exciting days at the Wilks house, exciting days….